Posted on August 23, 2014 by adjithegroundhopper

Alcester made hard work of beating a poor Burntwood side this afternoon. For a couple of years now I have seen Burntwood’s score lines and have deduced they are a poor side, but today I took the plunge to go and see them at their new home of Coppynook playing fields in Burntwood. I arrived around 2.55pm and the facilities here are basic as you would imagine. Just off a fairly busy road  and surrounded by straw fields, it reminded me quite a lot of Austrey Rangers ground. There is a changing room with a very basic tea bar. The field itself has a few other pitches and a play area for children as well as a small car park. The pitch is roped off by the changing rooms, and adequate for the level of football it is hosting. 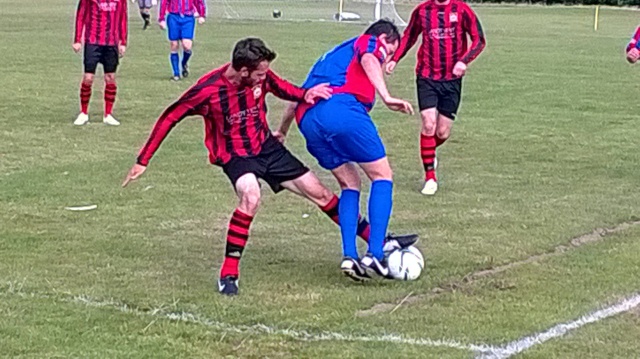 The teams emerged just before 3pm, the kits quite similar with Burntwood in a red and blue stripe strip and Alcester in a red and black stripe kit. Alcester were immense going forward but absolutely clueless when it came to finishing, I would go as far to say i have not seen a side so bad  at finishing since Knowle in the hopeless 0-0 with West Midlands Police last season. However they played Burntwood off the park for much of the game and their number 9 was by far the best player on the park. Alcester took the lead on 16 minutes with a well placed shot that the keeper could not get to. 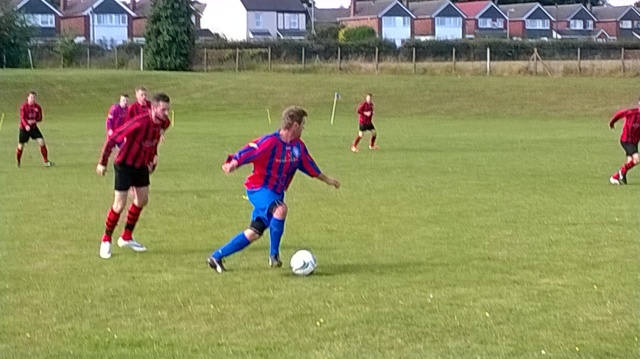 On the half hour, it was 2-0 and I think it was the number 9 but I am not to sure as I was a fair was away but after taking control sent a low squirming ball into the bottom far corner . This promised a rout that never came although Alcester kept attacking, they could only send tame efforts at Burntwoods keeper. Both keepers were poor kickers of the ball with many a goal kick ending in a banana kick. Burntwood did threaten a little more in the second half , flashing a ball across the face of goal. Alcester had a glorious chance to get a third at the end , after a first effort from outside the box was spilled into the air by the keeper, a onrushing player headed way over the bar to mark a embarrassing day of finishing. All in all this was a ok game , it had many chances to keep my interest, Burntwood proved they can play but would have to shape up massively if they ever want promotion. Alcester looked very good on the attack , but with finishing as bad as theirs , on this form it could be their undoing.