Posted on November 23, 2014 by adjithegroundhopper 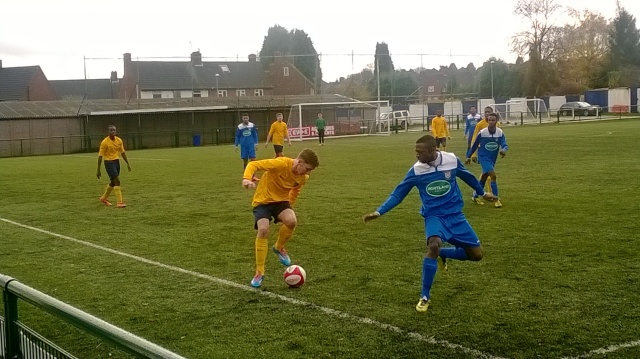 Sutton maintained their 100% record while sending Lichfield to the bottom of the table at a soggy Coles Lane yesterday. This game took place in the Midland League Under 21 west and with all the rain we have had , the synthetic surface seemed a safe bet to me. As I arrived the rain was only spitting , but within moments of kick off the heavens opened. The ground was nearly empty on my arrival only 9 had braved the weather on kick off but filled up as the game kicked off , the usual moms and dads. I took my seat in the stand, in the “Director’s box” which is a posh name for the plastic seats, and before long was besieged with all the parent zeroing in on me to sit next to me despite a empty stand , sods law. 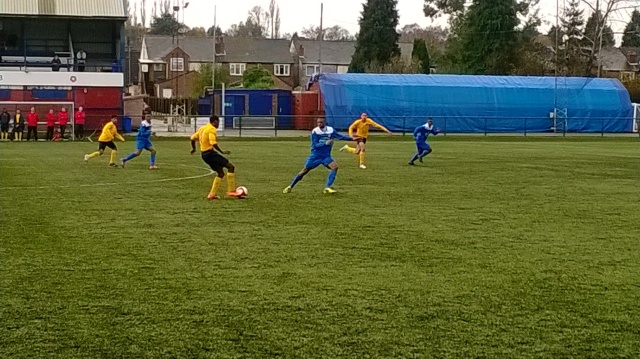 I was joined at this game , by chance by local hopper leighavfc , who just happened to be at the game. Sutton kicked off in their usual blue strip, but as I have seen the last couple of seasons, seem to dominate games without been good, probably a testament to the strength of this league in truth. Sutton had the best of the opening exchanges , but skied every shot they had. They took the lead from a corner, that was glanced home by a players head. It was 2-0 on 38 minutes, from another corner , the ball was headed out but was immediately struck back into the net. Just on minute later the floodgates had opened with a one on one that was struck beyond the keeper into the bottom corner.

At half time I braved the food hatch and brought some soggy chips for a pound. We walked to the half way line for the second half as the rain held off. The second half , continued as much as the first , as it went to 4-0 , when the player skipped around the keeper before finishing. It was 5-0, just after with a strike from the edge of left of the box. Lichfield carried on but had nothing going forward before finally managing a daisy cutting shot.  Sutton then made it 6-0 from a yard , with a scrappy attempt that somehow ended up in the bottom corner. The final goal came with a shot into the bottom corner. Lichfield managed to get a goal with the last kick  of the  game when the substitute Latouche scored a low shot down the centre of goal.