Posted on March 28, 2015 by adjithegroundhopper

Clarendon took another stride towards the title with a victory on this very damp Saturday morning. I went to this game purely for two reasons , one that I am interested in who takes the title and two it was absolutely peeing down, and I very much doubted the game would be on. The game did however take the place and it turned out to be a decent game in the end. Clarendon still trying to maintain pressure on at the top with 3 games left, Wolves however can only hope for 4th. I have watched Clarendon’s last couple of games and have found them to be a highly ordinary side,but grind out a result and that is how it was to day, for long periods they were poor. 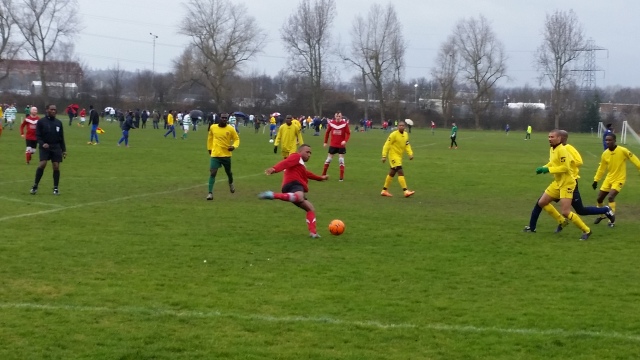 Wolvesin the red strip, took the lead on 25 minutes through Nathan Lodge who drilled the ball into the bottom corner. Ten minutes later, Clarendon were level in fortunate circumstances, from a free kick , Wolves keeper spilled the ball and  Josjua Berry tapped in. In the second half things looked fairly equal and the rain died down abit ,until Wolves were stunned by a poor low shot that went in off the post, Rian Russell the scorer.

Wolves kept chasing but very little for their efforts and eventually faded away and conceded a third when , a break away meant it was two on one , the keeper rushed out , the ball was dummied to Stevon Richards who walked the ball in for the easiest goal he will ever score. All in all a decent game in a league that is rapidly coming to a close. Some teams in the West Midland Christian League have already finished for the season so I have put the latest table down below, Connect Sports lost their final game so it is now a two horse race, St Mary’s drew 1-1 today, so it is anybody’s to win.

im a young groundhopper from the west midlands
View all posts by adjithegroundhopper →
This entry was posted in Games of 2015. Bookmark the permalink.