Posted on May 8, 2017 by adjithegroundhopper 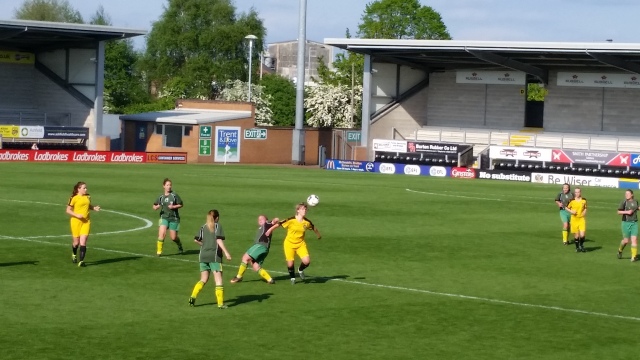 An ideal opportunity to cross off the Pirelli Stadium on the cheap last night and to see a top of the table clash. I am rather perplexed about this ground, although nice looking I am trying to work.out how it is allowed to host Championship football. 3 sides are terracing and are very low level stands.  The ground has a capacity of less than 7,000 with just over 2000 seats , quite incredible for a club playing in the second tier.

Burton have walked this league and Crusaders a very poor side somehow finished second which maybe speaks volumes of the quality of this league. Button took the lead on 3 minutes, Jordan Atkin turning to fire home . It wjas 2-0 on 33 minutes, from a corner Tasha Rothery”s scuffed strike found its way in.

On 41 minute’s,  it was 3-0 Atkinson first effort was blocked by the keeper, but she followed up with a rebound. It was much of the same in the second half going 4-0 up, with the goal of the game, just out the box Grimadell’s dipping shot looped over the keeper.

Atkin hit a poor penalty that rolled in for a hattrick , quite what the keeper was doing I am not sure as she just crumpled on the spot.  Amy Ramsdale scored a good goal nodding in a deep cross, again though a goalkeeping error palmed in the header. The final goal I did not believe was a penalty,  extremely sift in my opinion and the Crusaders definitely felt aggrieved chasing the referee about but Hayleigh Sutton took the kick, the first effort was saved but she tapped in the loose ball. Burton hit the bar at the death.