Posted on May 16, 2019 by adjithegroundhopper

Redditch came from behind to win the Les James Trophy.

Well the end I’d nigh, the games are drying up and with just one more on my radar on Saturday this looks to be my penultimate game of the season. The Les James cup final saw two Midland league division two teams go head to head. Both sides have had relatively underwhelming seasons finishing 8th and 12th. The final took place at the Bescot , home to relegated Walsall. 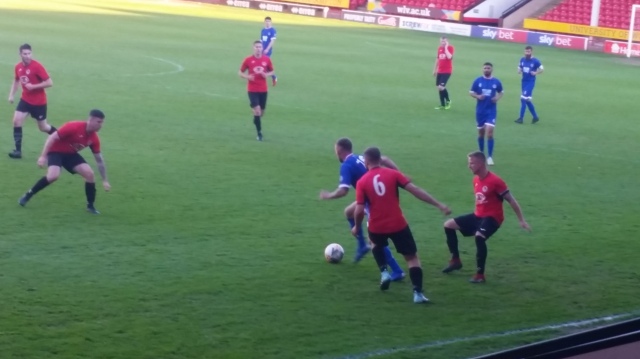 Knowle in the red were better early on but it was only in 25th minute we had some action when Knowle had a chance select against the bar ,from the corner Bridges headed home.

In a bizarre two minute period, Borough won the game, on 36 minutes Borough had a penalty that Billy Garvey smashed home before one minute later Khurum Iqbal slotted the ball low after being on acres of space following a cross in from the right.